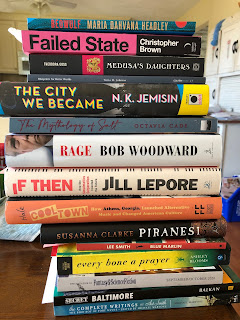 Clearly I overprepared for Sunday's Capclave panel titled Best Fiction of 2020, as there were (gasp) other people on the panel, with even taller stacks. And I was silly to think we'd have time to talk non-fiction, too.

Here's the list of speculative-fiction titles I brought to the panel, only a few of which I got the chance to talk about. I will add to this list later, as I have a lot more reading to do. For example, I have barely begun to read the print magazines, a stack of which will comfort me in December, once the semester's over.

Short Stories (SFWA defines these as shorter than 7,500 words)

J.R. Dawson, “She’d Never Had a Name Before,” Lightspeed, January

Yohanca Delgado and Claire Wrenwood, “The Blue Room,” Nightmare, May

Eugenia Triantafyllou, “My Country Is a Ghost,” Uncanny, January

Julian K. Jarboe, “Everyone on the Moon Is Essential Personnel,” Lethe Press, March (title story of their collection)

Novels (SFWA defines these as 40,000 words and longer)

Julian K. Jarboe, Everyone on the Moon Is Essential Personnel, Lethe Press, March