One of the slain in the Virginia Tech massacre this week was teacher and artist Christopher James "Jamie" Bishop, son of our friends Michael and Jeri Bishop, who was teaching a German class when he died.

His colleagues have set up a scholarship in his name for Virginia Tech students studying German. "Anyone who wishes to do something in memory of our son," Michael writes, "could give any amount to this fund." The address is:

Already there have been standing-room-only memorial services for Jamie at home in Georgia -- one at LaGrange College, where Michael has taught for years, and one at the family's church, First United Methodist in Pine Mountain. Funeral arrangements in Georgia will be posted by the church as they are known.

The Ledger-Enquirer of Columbus, Ga., covered the church memorial service, at which the pastor read aloud the sermon that Jamie himself had written and delivered from the pulpit as a teenager in 1989, on "one of those Sundays a pastor turns his pulpit over to a teenager," in reporter Richard Hyatt's words. The excerpts Hyatt quoted were:

Be alert. Death comes without warning, any day, any time. ... Never give up. Don't think of turning back.

Of the many profiles of Jamie that have been published this week, one of the best was in Tech's excellent local paper, The Roanoke Times. The one in the Los Angeles Times was the first I saw. Here's the one in Time. NPR has done a couple of segments on Jamie as well.

Paul Di Filippo has posted an excerpt from Michael Bishop's essay "A Reverie for Mister Ray," about the experience of reading Ray Bradbury's Dandelion Wine aloud to Jamie, who then was 9:

I especially admired Jamie's outrage and indignation when three children in the first third of the novel tell seventy-two-year-old Helen Bentley that she was never young, never pretty, never blessed with a first name. Jamie could not comprehend these children's stupidity and rudeness ...

Here's more of Jamie in his own words and images, at his website.
Posted by Andy Duncan at 10:36 AM 1 comment:

"A fleecing of taxpayer dollars"

A reader who identifies herself as Anne writes:

Thank you for posting your experience by the Meyersdale wind farm that has driven many people from their homes which were unsalable and some sold for under 80% less than their fair market value. Also, bear in mind that the turbines they are trying to erect in PA, MD, WV, and NY are between 393' and 600' tall....closer to peoples homes. It is simply a fleecing of taxpayer dollars to ruin taxpayer's quality of life.

Anne, do you mean that homeowners were displaced when the wind farm took their land, or that people left because they didn't want to live near a wind farm, or both? And do you know how many households were involved? The area we drove through was mostly wooded hunting land interspersed with pastures, but the few houses we passed weren't vacant.

Also, if one must live near a power plant, doesn't a wind farm make a better neighbor than a coal-burning plant or a nuclear plant? And doesn't a wind farm displace far fewer people, with far less environmental impact, than a hydroelectric dam? Which form of electric power generation do you prefer?

I readily grant you that using taxpayer money to lure new businesses -- including new businesses that compete with existing businesses, or drive existing taxpayers from their land -- can be problematic, and at best is a difficult judgment call. Were such incentives offered the wind-farm company? Do you know how much money was involved?

Thanks for writing.
Posted by Andy Duncan at 11:04 PM No comments:

I'm way too old and fat to model now. But for a writer, I'm pretty damn young and hot!

Posted by Andy Duncan at 8:18 PM No comments:

More on the Heimlich-performing golden retriever

The Maryland woman who says her golden retriever, Toby, saved her life -- by performing the Heimlich maneuver -- now is in the April 16 issue of People magazine, posing with the happy dog, of course.

Scott Goss of the Cecil Whig, which broke the story, has an interesting post on the media frenzy:

I’ve fielded literally dozens of phone calls and e-mails this week from nationally televised programs, radio stations and local news programs eager to declare Toby a hero. ... But somehow it seems like a shame that no one from "The Oprah Winfrey Show" or "Good Morning America" has ever called to ask about the paramedics, firefighters or police officers who risk their lives to help people every day. I can say with certainty that those heroes know exactly what they’re doing.

Posted by Andy Duncan at 8:09 PM No comments:

A union turns to Jeremiah

I was pleased to read that the newest United Steelworkers local is No. 2911, a reference to Jeremiah 29:11. In Today's New International translation, the verse reads:

"For I know the plans I have for you," declares the LORD, "plans to prosper you and not to harm you, plans to give you hope and a future."

Posted by Andy Duncan at 7:27 PM No comments: 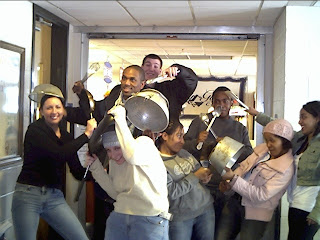 The International Club at Garrett College in McHenry, Md., sent the Times-News this photo to publicize this year's International Dinner. I thought it was a hoot, far superior to the usual line-'em-up-and-shoot-'em photo, but the newspaper hasn't made it available on the website yet, so club adviser Judy Carbone was kind enough to send me this copy for posting here.

In front are Lasma Kanele, from Latvia; Breanna Eckley, from the United States; Sharon Sarowa, from Papua New Guinea; Unathi Mahlati, from South Africa; and Tihitina Gizaw, from Ethiopia. In back are Jerome Jack, from England; Hrvoje Muhek, from Croatia; and Bongani Dlamini, from South Africa.

Down on the wind farm 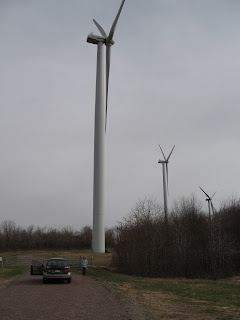 While taking the scenic route recently from Frostburg, Md., to Meyersdale, Pa., for the Pennsylvania Maple Festival, Sydney and I blundered into our nearest wind farm, the Meyersdale Wind Energy Center. Here is Sydney standing near the base of the southernmost windmill, the first of 20 that march along the ridgeline.

If these towers have the same dimensions as those in nearby Somerset, each is 210 feet tall, and their rotors are 231 feet in diameter, so their true height is something like 325 feet. They're visible above the trees from miles away, like Wells' Martian war machines. 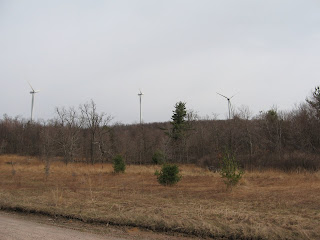 The morning we drove past, which wasn't windy at ground level, the windmills sounded like the world's largest slowly turning ceiling fans: rrrrWHUP rrrrWHUP rrrrWHUP. It was a weird sound, oddly musical, and not particularly loud, quite easy to talk over. On a really windy day, I'll drive back up there to see how the sound differs.

We discovered on the drive home that the best ground-level view of all 20 towers is from U.S. 219 between Meyersdale to the north and I-68 to the south. Here's a view from midair.

This wind farm is owned by FPL Energy, a sister company of Florida Power & Light, but the 30 megawatts it generates -- enough to power 12,000 homes -- is sold to FirstEnergy of Akron, Ohio. 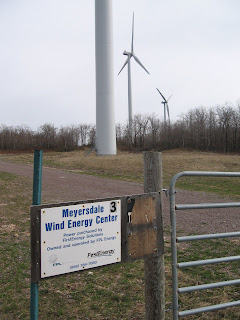 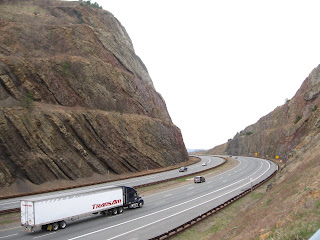 This afternoon, on the drive home from Scott Edelman and Irene Vartanoff's place in West Virginia, we stopped at the Sideling Hill Exhibit Center, between Cumberland and Hagerstown, to get an up-close look at this remarkable artificial canyon where 10 million tons of rock was blasted out of the ridge in the 1980s to make way for I-68. The scree is the incline you drive on, for miles east and west of "the Cut." The rock walls are nearly 900 feet high and, as you can see, quite close to the highway on either side, but on the foggiest days you can drive through the Cut without seeing either one.
Posted by Andy Duncan at 8:09 PM No comments:

The Duncan family connection to Slaughterhouse-Five

My family owns about 80 acres of woodland in Saluda County, S.C., acreage on which -- I grew up being told -- U.S. Army troops performed battlefield maneuvers as part of their training before being shipped overseas in World War II. The cabin used as a command headquarters was still standing in my youth, and we'd stay in it for a week or more each summer.

I thought of this a couple of weeks ago, as I was reading Kurt Vonnegut's brilliant novel Slaughterhouse-Five. (And yes, James Morrow was right to ask me, when he saw it in my hand: "Do you mean you're just now reading Slaughterhouse-Five?") Vonnegut's protagonist, Billy Pilgrim, is trained as a chaplain's assistant during the war (which is to say, he is wholly untrained during the war), and at one point he is on maneuvers with his unit in South Carolina. This is from Chapter 2, Page 31 of the 1991 Dell paperback edition:

It was Sunday morning. Billy and his chaplain had gathered a congregation of about fifty soldiers on a Carolina hillside. An umpire appeared. There were umpires everywhere, men who said who was winning or losing the theoretical battle, who was alive and who was dead.

The umpire had comical news. The congregation had been theoretically spotted from the air by a theoretical enemy. They were all theoretically dead now. The theoretical corpses laughed and ate a hearty noontime meal.

Remembering this incident years later, Billy was struck by what a Trafalmadorian adventure with death that had been, to be dead and to eat at the same time.

It was a Trafalmadorian adventure, of course, because the Trafalmadorians -- the aliens who abduct Billy later on -- experience all events simultaneously: "All moments, past, present, and future, always have existed, always will exist" (Ch. 2, Page 27). Anyway, I decided, reading this brief scene, that the otherwise unidentified Carolina hillside was on the Duncan farm in Saluda County, S.C. I have no evidence for it, but I'm convinced of it all the same.
Posted by Andy Duncan at 8:32 PM 2 comments: