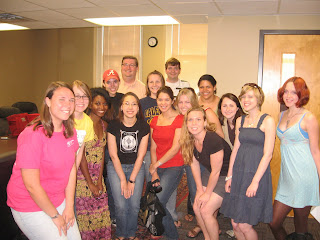 Here I am with the students in my spring 2008 seminar in the University of Alabama's Honors College. Left to right: Erica Mihelin, Casey Sloan, Crystal Ellis, Susan De Leon (in cap), me, Renee Rivas (in Beijing Lantern Festival T-shirt), Courtney Watts, Jessica Trevino (in orange), Kalen Berry (in back), Amy Jensen, Janessa Hogans (in back), Laura Bass (in front, with hands on knees), Ellie Killian, Laurie Skelton and Jessie Foster.
Posted by Andy Duncan at 10:20 PM 3 comments:

Carol Pinchefsky alerts us to this fine 2004 poem from Speakeasy, reprinted in the Utne Reader.
Posted by Andy Duncan at 10:11 PM No comments:

Buddy Moore points out this recent events calendar in coastal North Carolina. Scroll down to the May 1-2 event at Roanoke Bible College:

Spring Musical -- "There is a Hope"
(The theme this year is not appropriate for children.)

I'm always delighted when science fiction crops up in conversation with non-sf folks. Sometimes someone other than me even brings it up!

Case in point: At last week's book-group meeting, Bob Doyle (our astronomer) argued that many of the social changes advocated by Michael Lerner in his best seller The Left Hand of God: Healing America's Political and Spiritual Crisis will be imposed not by individual moral choices but of necessity by the disappearance of cheap petroleum. That prompted Keith Schlegel (one of our several English-department folks) to recall a classic Fredric Brown story, "The Waveries" -- the one about energy-eating aliens whose grazing habits have Luddite effects on human civilization.

That's the second "Waveries" reference I've heard in as many months. Joe Haldeman invoked it in his introduction of Vernor Vinge at the International Conference on the Fantastic in the Arts in March. Joe said talk of the looming Singularity sometimes makes him long for the slowed-down society depicted in Brown's story.

Originally published in the January 1945 issue of Astounding Science Fiction, "The Waveries" is included in the excellent collection From These Ashes: The Complete Short SF of Fredric Brown, published in 2000 by the invaluable NESFA Press.

Isaac Asimov included it years ago in his anthology Isaac Asimov
Presents The Great SF Stories 7 (DAW, 1982), but advised skepticism in his introduction:

I want to dissent on the thesis because I'm a technophile (that is, I love advancing technology) and don't think that walking backward is the route to a Golden Age.

I just want to refer to one small passage in the story where Pete Mulvaney says that the air in New York City is "better than Atlantic City, without gasoline fumes" because the automobiles are gone. The next question from George Bailey is, "Enough horses to go around yet?" and the answer is "Almost."

Well, I've passed the horses at Central Park that pull the buggies, two or three of them, and I have to hold my breath every time. They stink of sweat and manure. That's two or three. Fill the city enough to take care of even the "last million people" the story speaks of and everyone will long for gas fumes again. Particularly in the summer when there will be no air conditioning (something Fred, writing in 1945, says nothing about).

Enjoy the story, but keep your perspective, that's all.

Yes, one of the story's main characters is named George Bailey, also the name of James Stewart's character in Frank Capra's movie It's a Wonderful Life, released nearly two years after Brown's story was published. Coincidence?
Posted by Andy Duncan at 9:11 PM 1 comment:

For years Sydney and I had season tickets to the productions of the University of Alabama Department of Theatre and Dance, and one of the actors we most admired was the perennial scene-stealer Michael T. Walker, a comic dynamo who sometimes suggested a cross between Nathan Lane and Ricky Gervais. Sydney just found Walker's website, and I'm pleased to see he's doing well, most recently as Edna in the national tour of Hairspray. If you get the chance to see Michael T. Walker perform, go. He's value.
Posted by Andy Duncan at 9:02 PM 1 comment:

My favorite headline in years

Other news organs worldwide reported on a bit of climate-change research in Oxfordshire, but only the BBC rose to the headline-writing occasion.

Thanks to John Latta for passing this along.
Posted by Andy Duncan at 8:57 PM No comments:

"You're thinking of Aldo Kelrast, aren't you?"

While I'm on the topic of unintentionally funny comics, Jack Roberts passes along this handy list of "The 5 Most Unintentionally Hilarious Comic Strips." Seeing "Dick Tracy" on the list is more sad than funny.
Posted by Andy Duncan at 8:52 PM No comments:

Tony Brock has introduced me to the Superdickery website, which started out compiling instances of Superman acting like a jerk, but has blossomed into compiling all sorts of problematic and/or unintentionally funny comics covers and pages, mostly from DC. A few of my favorites:

"It's important that I live the next 24 hours as a black woman!"

"Without my power ring I'm super-powerless -- except from the waist down!"

"I couldn't sit down all night, after what that robot did to me!"

I must confess, however, that I was a regular reader of Giant-Size Man-Thing without once realizing the implications of the title.
Posted by Andy Duncan at 8:27 PM No comments:

The Mammoth Book of Extreme Fantasy 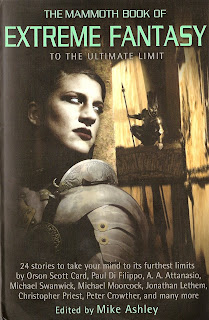 I was pleased to receive in Tuesday's mail my contributor copies of The Mammoth Book of Extreme Fantasy, edited by Mike Ashley, a trade paperback published in the U.S. by Running Press and in the U.K. by Robinson. The first story in the book is my 2001 Starlight 3 story "Senator Bilbo."

In his introduction, Ashley defines "extreme fantasy" as "those stories that took a basic idea, whether simple or complicated, and developed it to some extreme, beyond what the reader might normally expect. ... In all of the stories, the authors have taken a fantastic idea -- and I mean fantastic in both its senses -- and then seen how far they can push it."

Ashley also writes in the introduction, "I have presented the stories in sequence from the least to the most extreme, so your imagination can expand as you work through the book." And the first words of his headnotes to my story are: "We begin our journey in what ought to be the relative safety of the Shire."

I'm delighted to be in the book, which includes some of my favorite stories -- Ted Chiang's "Tower of Babylon," Jeffrey Ford's "Boatman's Holiday," Michael Swanwick's "Radio Waves" -- as well as a number I look forward to reading. Authors include Orson Scott Card, R.A. Lafferty, Jonathan Lethem, Michael Moorcock, Howard Waldrop, Liz Williams, etc. ... and William Hope Hodgson, with a story written 96 years ago.
Posted by Andy Duncan at 8:29 AM 1 comment:

I'm surprised but delighted that my Eclipse One story "Unique Chicken Goes in Reverse" is one of the inaugural nominees for the Shirley Jackson Awards.

Also on the ballot, I'm pleased to see, is the Jack Dann-Gardner Dozois anthology Wizards, which includes my story "A Diorama of the Infernal Regions; or, The Devil's Ninth Question."

Congratulations to all the nominees.
Posted by Andy Duncan at 9:54 PM 2 comments:

When my in-laws win the lottery ...

... which I'm sure they'll do any week now, and when they split the proceeds with Sydney and me, as they long have promised, I'll immediately order a Tesla Roadster.

The battery weighs a thousand pounds, more than a third of the total weight of the car.
Posted by Andy Duncan at 8:47 PM No comments: