The U.S. Energy Information Administration says it will cut its estimate of the total natural gas in the Marcellus Shale by 80 percent to match the U.S. Geological Survey estimate, according to The New York Times.  "They’re geologists; we’re not," an EIA analyst said, rather sheepishly.

To be sure, 84 million cubic feet is still a lot of natural gas, but that USGS estimate itself is generous, because it counts all the gas that's "technically recoverable," meaning using every iota of extraction technology available on the planet.  How much of that would be economically feasible, even amid boom natural-gas prices, is another story.

That supposedly scientific estimates of Eastern gas reserves seem to vary so wildly, depending on who's making the estimate and what's being counted and what time of day it is and whether you hold your mouth just right, is deeply troubling.  I agree with Bill Powers, publisher of Powers Energy Investor:


If the country is going to embrace natural gas as the fuel of the future, there needs to be a lot more transparency in how these estimates are calculated and a more skeptical and informed discussion about the economics of shale gas.

(Thanks to Dale Sams for passing this along.)
Posted by Andy Duncan at 6:46 PM 1 comment:

Can a bar of soap in the bed prevent leg cramps?

I've heard for years, especially from Sydney's family, that a bar of soap in the bed prevents nocturnal leg cramps.  Having never suffered that malady, I've never had occasion to try it.  Now Snopes.com labels the folk belief "undetermined," on the assumption that no one has proven or disproven it.

I'm inclined, like Snopes, to attribute any benefit to the ever-reliable placebo effect, but I'd still like to know whether any scientists have tested this belief.

A Father's Day remembrance on the Outer Banks

While running errands today, I saw two women and two boys planting a cross beside the U.S. 158 bypass in Kill Devil Hills, N.C.

I stopped to talk and learned the cross marks the site where Victor Wilson of Kill Devil Hills was fatally injured on his motorcycle in May 2010.  The boys are Wilson's sons, who were 13 and 6 when he died. Planting the cross was the family's Father's Day observance.

Here's the original Virginian-Pilot account of Wilson's death, which credits police as saying that a pickup-truck driver leaving the Outer Banks Brewing Station across the highway pulled in front of Wilson's Harley about 7:30 p.m. on May 21, 2010. "Charges are pending," says the story, but I find no follow-up online.

The new cross is in the corner of the Captain George's lot on U.S. 158, a.k.a. South Croatan Highway, at the Goddard Avenue intersection. We drive by dozens of such markers every day; every one is a story.
Posted by Andy Duncan at 4:05 PM 1 comment: 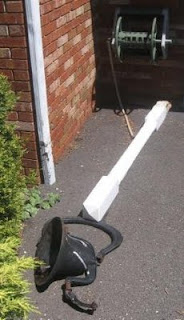 In our absence this week, the bell post in our front yard finally fell down of its own accord, sparing us a chore we'd been putting off for five years. The timing is good, as Big Trash Day is next week.
Posted by Andy Duncan at 3:03 PM No comments: