Publishing news: a collection, a novelette and a second edition

Thanks, everyone, for the supportive responses to my previous blog entry. In particular, Jeff Ford writes, "So when's the next collection coming out? That's a great line-up of stories," and Trent Hergenrader writes, "Sure would be nice to have a bunch of those stories bound up in another collection ... any plans for such a thing?"

Funny you should ask, Jeff and Trent! Nick Gevers has given me the go-ahead to announce that PS Publishing plans to release my second collection, titled The Pottawatomie Giant and Other Stories, in 2011. Tentative contents include "The Dragaman's Bride," "Unique Chicken Goes in Reverse," "A Diorama of the Infernal Regions; or, The Devil's Ninth Question," "Zora and the Zombie," "Daddy Mention and the Monday Skull," "Provenance," "The Big Rock Candy Mountain," "Senator Bilbo," "The Chief Designer" and the title story, plus a couple of new stories, plus extensive author notes on each story -- tucked away in the back, for easy avoidance by those who prefer not to pull aside the curtain.

In the meantine, PS also will be publishing my new novelette, The Night Cache, as a standalone volume this winter, the 2009 Christmas gift to Postscripts subscribers -- though non-subscribers can buy copies as well. The Night Cache is squarely in that fine Christmas tradition of the supernatural lesbian geocacher codebreaker romance, though the rumors that it's also a Poe pastiche are not (quite) true. Inspired by Poe, yes, but not a pastiche.

Finally, the second edition of my 2005 non-fiction book Alabama Curiosities, which made me world-famous in Alabama, is newly published by Globe Pequot Press. It includes lots of material not in the first edition.

Since "The Dragaman's Bride" is being published this fall in the Ace anthology The Dragon Book, edited by Jack Dann and Gardner Dozois, I'm looking sort of prolific in 2009. Thanks to all my friends and readers for the encouragement.
Posted by Andy Duncan at 5:31 PM 10 comments:

At the Launch Pad workshop this week, both N.K. Jemisin and J.V. Jones asked me where they could find my stories. As this question comes up periodically, I'm posting here a list of every Andy Duncan story thus far, including reprints, with notes of major award attention and links to a few stories online. Note, too, that my 11 earliest solo stories (everything in the list from "Lincoln in Frogmore" downward, except for the collaborative "Green Fire") are still available in my collection Beluthahatchie and Other Stories (Golden Gryphon, 2000). If any bibliographers out there can think of any stories or reprints I missed, please let me know. Thanks again to all the editors, publishers, teachers and readers who made these happen.

Looking through my digital photos of the past few years, I could turn up only this photo of Charles, snapped as he was threatening to bash me with his walking stick if I didn't put the camera down. I guess that's one reason I don't have more photos of him. 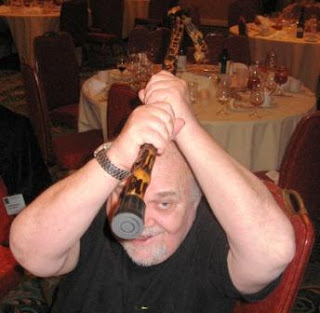 When Sydney was attending a conference at Stanford a few years ago, and I was tagging along, Charles kindly invited us to dinner at his house, a.k.a. the Locus office, and we had a most enjoyable time with Charles, the Locus staff and the other guests. Charles loved entertaining and was entertaining, and he made sure all his guests were entertained, or else!

A mutual friend who knew Charles much better than I did, and for a lot longer, told me once that he always believed Charles had constructed a life in emulation of Jubal Harshaw in Robert A. Heinlein's novel Stranger in a Strange Land, and nothing I saw at Charles' house that night contradicted that impression.

One of my favorite memories of Charles is from that evening, as he roared in laughter when his extraordinary collection of autographed first-edition books eventually reduced me to a sputtered stream of obscenities, just as he had intended.

I also remember my Locus interview. I followed Charles to his hotel room -- where proofs of the next issue were strewn about every flat surface -- and watched him switch on a hand-held recorder.

"Now you talk," he said. So I talked, while he leaned back in his chair, fingers intertwined across his belly, and watched me -- at least, I assume he was watching me; with Charles' cocked eyes, it was hard to tell, sometimes. Two or three times during the hour, he interjected an observation, such as: "So you don't believe in the Singularity, then." He took no notes. Eventually he nodded his head and turned off the recorder.

"Well," I said, "good luck getting a coherent article out of that."

"Oh, you're easy," Charles said, "like Bruce Sterling. Talkers are easy. Let's go downstairs and get a drink."

Charles accurately thought Sydney was gorgeous, and instead of "Hello, Andy," his standard greeting was usually "Is Sydney here?" If my answer was, "No," he'd make a dismissive sound with his mouth and turn his back on me. So instead of saying, "Hello, Charles," I took to greeting him with, "She's upstairs!" or "She's in the dealer's room!" Whereupon he'd smile broadly and be very friendly indeed.

When he did talk to me, he usually needled me about not writing more. When he found out I had started a blog, he cried out in dismay. "That's not writing!" he said. "Now you'll get even less accomplished."

I saw my first copies of Locus in the dormitory living room at Clarion West in 1994, and once I got home to Raleigh, N.C., I bought the subscription that I've kept up ever since. When the first issue arrived -- its cover story, I think, an obit of Robert Bloch -- I thought, "OK! I'm a member of this community now!" That's still what I think, every month when Locus arrives. I hope it keeps arriving for many years to come. Soon the cover story, I suppose, will be an obit of Charles N. Brown himself. I'll miss him.
Posted by Andy Duncan at 2:46 PM 2 comments: