I won a Nebula Award!

My story "Close Encounters" has won the 2012 Nebula Award for Best Novelette, selected by the Science Fiction and Fantasy Writers of America. Here's the complete list of winners and nominees in each category. This was my first Nebula win and seventh nomination.

I wasn't able to attend the May 18 awards banquet, which was in San Jose this year, for the excellent reason that Sydney and I were attending a family wedding on the other side of the continent, in Virginia Beach. So I wound up sitting in the Founders Inn lobby very late that night, watching the live feed of the Nebula ceremony on my iPhone, so that I wouldn't wake Sydney.

Moments before Liza Trombi from Locus began to read out the names of the nominees in my category, a large and boisterous family invaded the lobby, so I could hear nothing, and had to run outside, just in time to hear Liza announce my story as the winner. Elated, I pumped my fist and danced on the sidewalk ... right out of range of the lobby Wi-Fi, so I lost my signal and missed awards administrator Steve Silver reading my acceptance speech in absentia. Here's what I said, via Steve:


This is a great honor. Thanks to the members of SFWA for the encouragement, and to my fellow nominees for the inspiration. Thanks to the editors of Fortean Times for the idea. Thanks to Mark Wingenfeld for research assistance, to Nick Gevers for commissioning the story, to Jim Goddard for editing it, to Pete Crowther for publishing it, to Gordon Van Gelder for re-publishing it, and to Chris Roberts and Kent Bash for illustrating it. More general thanks to my parents; to my classmates and teachers, especially at Clarion West 1994; to my students, especially Clarion  2004 and Clarion West 2005; to my editors, especially Ellen Datlow, Gardner Dozois, Patrick Nielsen Hayden, and Jonathan Strahan; to ICFA, Sycamore Hill, Norton Island and the KGB Bar; to John Kessel, who grew me from a bean; and to my wife, Sydney, for everything. Finally, I’d like to propose a toast to Sydney’s cousin Andrea Ward and her groom Justin Wiley, who got married in Virginia earlier this evening; that’s where I am this weekend. May they have SFWA’s best wishes for a long, happy life together in this increasingly science-fictional world.

UPS is scheduled to deliver my Nebula to the house this coming Wednesday, June 5. In the meantime, here's a photo of it that my bookseller friend Glennis LeBlanc thoughtfully took at the banquet: 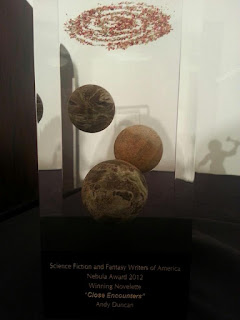 Nebulas are beautiful, aren't they? Nebulas make Pulitzers look like Employee of the Month certificates. (Not that I'd decline a Pulitzer, either.)

If you want to read my winning story, you've got a lot of chances. "Close Encounters" was first published in my 2012 collection The Pottawatomie Giant and Other Stories, from PS Publishing. It was reprinted as the cover story of the September/October 2012 issue of The Magazine of Fantasy & Science Fiction, with a fine cover illustration by Kent Bash. Here's Lois Tilton's rave review of the story in Locus Online.

That would make five reprints, putting "Close Encounters" in a tie with "Zora and the Zombie" (2004) for my most-reprinted story. However, if "Close Encounters" also is in the next Nebula Awards Showcase volume, to be edited (I believe) by Kij Johnson -- and why wouldn't it be? -- that'll be reprint No. 6, and "Close Encounters" will be my new champ.

According to Mark R. Kelly's invaluable Science Fiction Awards Database, previous winners of the Nebula for Best Novelette include ... well, you can see the list here. It's a parade of classics, is what it is. Do I think my story is as good as (to pick only four) "Gonna Roll the Bones," "The Bicentennial Man," "The Screwfly Solution," or "Bloodchild"? No. Am I nevertheless ecstatic to be listed with them, now and in perpetuity? Absolutely.