I'm doing a reading at 8 p.m. Thursday, Feb. 28, in the second-floor coffeehouse in the student center at Allegheny College in Meadville, Pa. Y'all come. Here's the announcement.
Posted by Andy Duncan at 8:22 PM No comments:

At Greg Frost's Feb. 21 reading at Main Street Books, we were pleased to meet Mount Savage, Md., artists Leah and Shane Odom of Miscellaneous Oddments. Check out their masks. They brought along copies of Faerie Magazine, edited in the Baltimore suburb of Gwynn Oak; the Odoms contribute to Faerie and its sister publication, Pirates Magazine. Maryland holds many surprises.
Posted by Andy Duncan at 2:01 PM 1 comment:

"Unique Chicken" is a Nebula nominee

My story "Unique Chicken Goes in Reverse," from Jonathan Strahan's anthology Eclipse One, is a Nebula Award nominee. Here's the complete ballot at the Science Fiction and Fantasy Writers of America site. (Thanks to my fellow nominee Judith Berman for providing the link.)

I am tickled and humbled, and I congratulate all my fellow nominees, in all the categories. I'm honored to share a ballot -- indeed, a field -- with each of you.
Posted by Andy Duncan at 5:00 PM 6 comments:

On the subject of my Jim Anchower stocking cap, Oz Drummond writes:

Posting this comment without the comparative photos is simply not cricket.

It's a fair cop. Anchower's cap can be seen at The Onion website, and mine can be seen here. 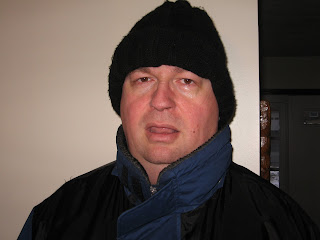 I shot an arrow into the air

The controversial practice of "active SETI" was news to Lex Alexander, as it was to me before I read the Seed article about Alexander Zaitsev. Lex writes:

We've been sending radio signals into space for more than a century now. God alone knows what any intelligent life that receives them might make of them.

Also, I thought SETI was primarily about LISTENING for radio signals. I didn't know we were broadcasting intentionally. What would we send? "24" reruns? Pi?

An "Interstellar Rosetta Stone," for one; here's an annotated excerpt.

Diffuse transmissions and targeted ones are two different things, as the excellent article in Seed points out:

Even if something menacing and terrible lurks out there among the stars, Zaitsev and others argue that regulating our transmissions could be pointless because, technically, we've already blown our cover. A sphere of omnidirectional broadband signals has been spreading out from Earth at the speed of light since the advent of radio over a century ago. So isn't it too late? That depends on the sensitivity of alien radio detectors, if they exist at all. Our television signals are diffuse and not targeted at any star system. It would take a truly huge antenna—larger than anything we've built or plan to build--to notice them.

Alien telescopes could perhaps detect Earth's strange oxygen atmosphere, created by life, and a rising CO2 level, suggesting a young industrial civilization. But what would draw their attention to our solar system among the multitudes? Deliberate blasts of narrow-band radiation aimed at nearby stars would -- for a certain kind of watcher -- cause our planet to suddenly light up, creating an obvious beacon announcing for better or worse, "Here we are!"

Lex also asks whether I've seen the Jodie Foster movie Contact. I sure have, and loved it. I also enjoyed the Carl Sagan novel that inspired it, but nothing in the novel thrilled me like the sequence in the movie in which the lonely techs first receive the alien transmission.

Ah yes...diplomacy...from a government that doesn't officially believe in aliens :)

Since there's little, if any, evidence for them -- beyond the theoretical -- disbelief seems a reasonable response to me. But active SETI is controversial in part because it's beyond any government's ability to stop. For now, scientific and other non-governmental organizations conceivably could stop or discourage such efforts -- but one day, Seed speculates, this sort of targeted transmission will be possible from any backyard, and there'll be no stopping it then.
Posted by Andy Duncan at 10:26 PM 2 comments:

The march of science

Unfortunately, the medical community will probably pooh-pooh this research, much as they did the man who proved that ulcers are caused by bacteria.

Point taken, but skepticism in the absence of evidence that can be duplicated in the lab is not a bad thing. Once that evidence is duplicated, the paradigm (to use Thomas Kuhn's term) tends to shift quickly. In the case of Barry Marshall and Robin Warren, a mere 23 years from discovery of the ulcer-bacteria link to the Nobel Prize in medicine ain't bad. (Granted, H. pylori had been discovered in 1899, then forgotten for generations, partially because its discoverer wrote it up in Polish.)

My friend and onetime colleague Lex Alexander, who covers medicine for the News & Record in Greensboro, N.C., notes that similar work is being done, quite successfully, by Dr. Ronald Zagoria in Winston-Salem. I'm delighted to know this -- but I'm still slightly more impressed by Kanzius. You're more likely to expect such things from Zagoria since he is, after all, a doctor.
Posted by Andy Duncan at 9:24 PM No comments:

On the question of whether Stephen Colbert can fairly be described as a "fake TV pundit," Richard Parks writes:

Something similar must have happened in Britain in the early 1960s with That Was the Week That Was. Quoth Wikipedia:

After two successful seasons in 1962 and 1963, the programme did not return in 1964, as this was a General Election year and the BBC decided it would be unduly influential.

On a more personal note, I knew quite a lot about the "adult" movies of the early 1970s, and had a precocious appreciation for them, even though I was allowed to see none of them -- because I religiously read and studied the parodies of them in Mad magazine. And in adulthood, whenever I'm in England and want to know what's really going on, I read Private Eye.
Posted by Andy Duncan at 9:00 PM No comments:

What about "Put Your Hands Together," the O'Connor pastiche written by George Alec Effinger under the pseudonym "O. Niemand"?

I knew people immediately would suggest other stories for the book, and I'm honored that you're the first, Ted. I haven't read the Effinger story (first published in Asimov's in 1988), but I see it's in Golden Gryphon's 2005 Effinger collection Live! From Planet Earth.

I'll pass along any suggestions, but my understanding is that Payseur & Schmidt is interested not in a comprehensive reprint anthology of O'Connor pastiches -- like Golden Gryphon's 1998 Eternal Lovecraft, for example -- but in a volume of a few thematically linked stories that then can be lovingly illustrated, packaged and supplemented.

Still, I'd be happy to compile here a list of stories and novels, of whatever genre, that pastiche or otherwise pay overt homage to O'Connor and her work -- as opposed to the much longer list of fictions that simply share some of her preoccupations and techniques (Walker Percy, Cormac McCarthy, Joe Lansdale, Elizabeth Massie, etc.).
Posted by Andy Duncan at 8:26 PM 1 comment:

Gregory Frost is coming to town

The invaluable Palace Theatre in downtown Frostburg is showing Juan Antonio Bayona's ghost story The Orphanage (a.k.a. El Orfanato) Feb. 15-16, and Sydney and I are sponsoring it. This is our second such fit of artistic patronage; we previously co-sponsored Pan's Labyrinth at the Palace in 2007. Y'all come.
Posted by Andy Duncan at 10:38 PM No comments:

My hero Brett Cox reports that Payseur & Schmidt, publisher of fine, beautifully designed books such as John Clute's The Darkening Garden and Nicola Griffith's And Now We Are Going To Have a Party, has accepted his proposal for a reprint collection of four stories inspired by the life and work of Flannery O'Connor:

... that I lived in a crumbling but still glamorous brownstone high-rise in the city. The name of the building, spelled out in stained glass over the front door, was The Oasis. My large, high-ceilinged apartment, like all the other apartments, was thronged with people, with refugees. Each room was a jumble of mismatched beds and furniture and stacks of suitcases, trunks and boxes bound with twine. All the beds were occupied by people sleeping, eating, playing cards, visiting with one another, dressed and undressed. Very narrow crooked aisles separated the beds, so that in trying to walk across the room, I kept stumbling into people and apologizing. Everyone was a stranger to me except Ted Chiang, whose bed was several beds over from mine. I couldn't find the exit, but I did find my way to the kitchen, which was as crowded as the other rooms with beds and junk. I marveled: "I didn't know we had a kitchen!" Then I was on the street outside, looking up at the building, waiting in line to board the airplane that would take me back to my apartment. It was a 1930s prop plane, like the one in Lost Horizon. I strapped myself in, and the plane took off nearly vertically, pressing me back into the seat and cutting off my breath. Then I woke up.
Posted by Andy Duncan at 9:22 PM No comments: