The summit of Sharp Top

Sydney and I have been visiting her parents in Roanoke, Va., this weekend, and today we took a Sunday-morning excursion to the summit of Sharp Top at the Peaks of Otter, on the Blue Ridge Parkway north of town.

We briefly considered the 90-minute one-way hike to the summit from the parking lot: 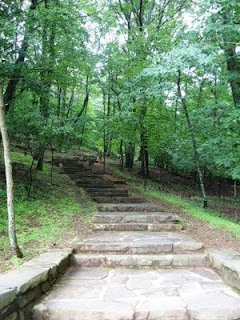 But cooler heads opted to take the bus instead: 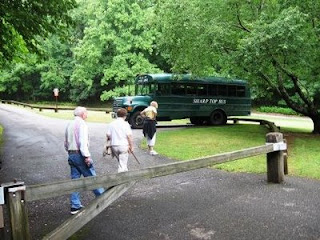 The bus takes you up a one-lane switchback road to a turnaround 1,500 feet short of the summit -- still a good half-hour's walk. 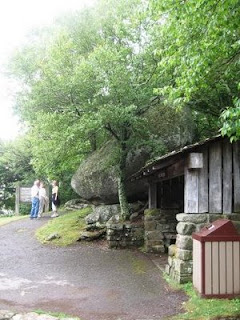 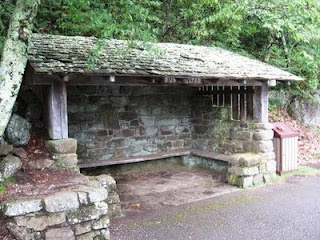 I became "Big Chief Bring-'Em-Up-Rear," as my father-in-law called me, and from time to time took a photo of the path behind: 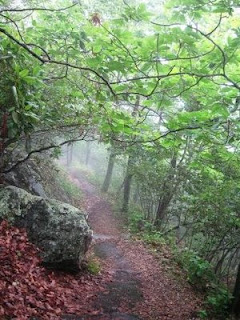 This stone overlook was welcome, as it made a good resting place, but that was its only use this morning because the clouds surrounding the mountain hadn't lifted: 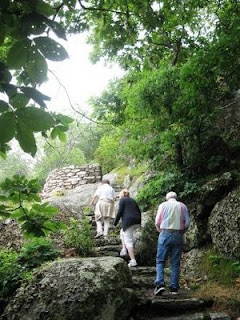 My father-in-law reminisced as we climbed about the weeks he spent in 1948 dismantling old barns on this mountain as a National Park Service summer employee. 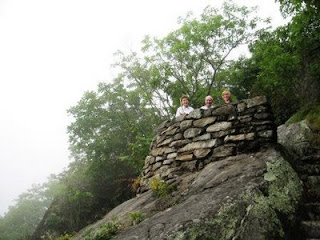 The mist got thicker as we ascended: 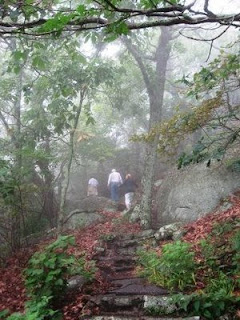 This was a welcome sight: 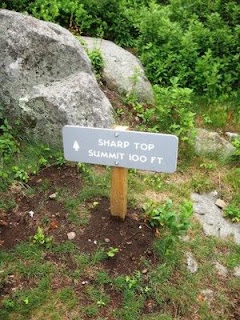 We think the stone house at the summit was built in the 1930s by the same New Deal-era work crews that built the switchback road and most of the Blue Ridge Parkway: 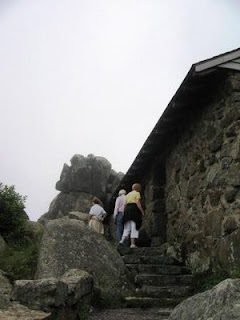 The summit is all rock, so the stone house built upon it is downright biblical in its solidity. I wouldn't want to spend a winter in there, though: 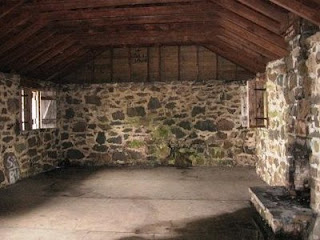 My mother-in-law, age 83, was determined to make it all the way to the topmost point of the path, and did, but the gnats, wasps and other flying critters that beset her just after I snapped this photo made her reluctant to linger for a portrait at the summit: 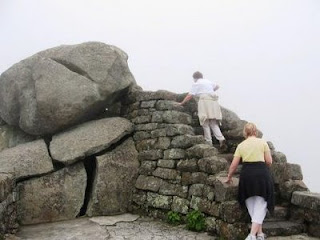 We retraced our steps downward, back into the mist: 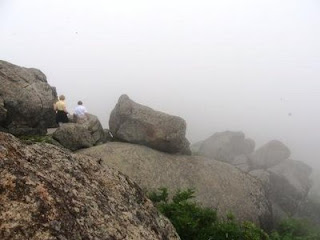 When we reached the stone overlook on the downward trip, we found that the folks ahead of us had been arrested by a deer grazing contentedly only a few feet away: 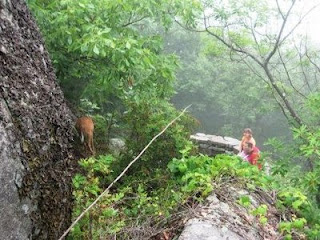 The deer kindly posed for some photographs. The deer in congested Eastern parklands have grown too tame for their own good, alas, as they've lost their necessary skittishness around highway traffic, and the "people food" they mooch hurts their digestion: 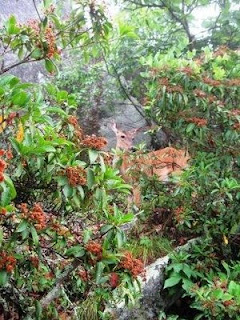 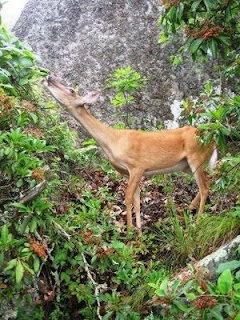 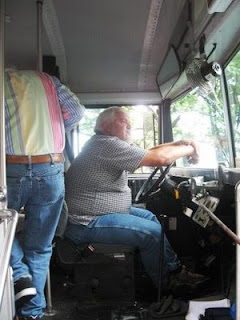 Mr. Mitchen enjoys his captive audience, stopping the bus a couple of times on the way down the mountain to tell stories: 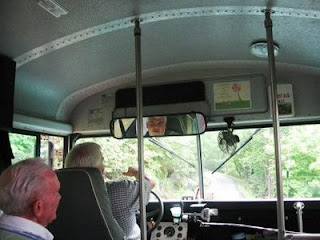 He said his grandfather, who died this past Easter at age 98, helped build the switchback road we were traveling on. This was good for years of family comedy, as Ronnie would ask, "Granddad, how come you made that road so narrow?" and his grandfather would reply, "If we had known you'd be driving on it, we'd have made it as wide as U.S. 460." 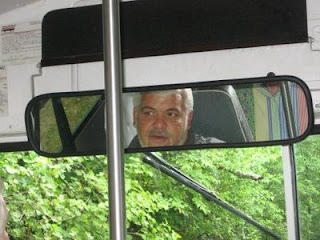 On the way down, though I wasn't fast enough to get photos of them, we saw more deer, a group of wild turkeys (two adult females and a number of youngsters), and a male black bear that scrambled out of the road just ahead of us. Mr. Mitchen said he wasn't surprised by the bear, as he had seen a hawk that morning -- and on days when he sees a hawk, he always eventually sees a bear, too.

Back at the Peaks of Otter Lodge on the parkway for lunch, I took this photo of the mountaintop we just visited. Sharp Top isn't the tallest of the Peaks of Otter, but the starkly beautiful crag at the top has been a tourist draw since the 19th century: 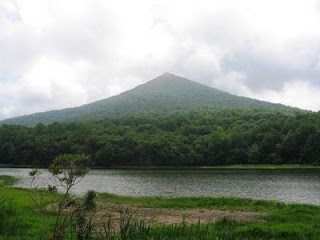 This excursion was my idea, and I told Sydney later these photos are proof that I'll climb a mountain to get out of going to church.
Posted by Andy Duncan at 7:47 PM 2 comments:

The end of Justice Talking

I'm sorry to hear that the excellent National Public Radio show Justice Talking is no more, its nine-year Annenberg grant having run out.

To paraphrase the old Women's International League for Peace and Freedom poster: It will be a great day when National Public Radio shows get all the money they need and Rob Schneider has to apply for an Annenberg grant to make a movie.
Posted by Andy Duncan at 9:23 PM 1 comment:

The Fly on the opera-house wall

"I actually might get you to this opera," Sydney says, and she's right. It's an opera of The Fly, directed by David Cronenberg, music by Howard Shore, libretto by David Henry Hwang, conducted by Placido Domingo.

While set in the 1950s, the opera apparently closely tracks Cronenberg's 1986 movie, rather than the 1958 Kurt Neumann movie (starring David Hedison and Vincent Price) and the 1957 George Langelaan story in Playboy that launched the franchise.

Actually, Sydney got me to one opera already in this lifetime: Jerry Springer: The Opera in London, starring David Soul. It was a stitch, and I even bought the T-shirt.
Posted by Andy Duncan at 8:40 PM No comments:

The discovery of the only known copy of the complete three-and-a-half-hour cut of Fritz Lang's Metropolis is big news for movie buffs -- and science-fiction movie buffs in particular.

Thanks to Lokke Heiss for alerting me, via the International Association for the Fantastic in the Arts listserv.
Posted by Andy Duncan at 8:31 PM No comments:

Jack Speer and "The Atheism Issue"

I was sorry to hear of the death of science-fiction fan Jack Speer. I commend to everyone his pioneering history of fandom, Up To Now, written for distribution at the first World Science Fiction Convention in July 1939, when the historian himself was all of 18. (That Worldcon concluded 69 years ago today, in fact.) Up To Now is a 35-page PDF at the invaluable eFanzines.com. Speer's chapter headings include:

In a StoryCorps conversation with her niece, recorded in Cincinnati and subsequently aired on National Public Radio, a 94-year-old woman recalls her inflatable brassiere exploding during an airline flight in the Andes -- which apparently happened at least 70 years ago.

At his urban-legends blog, David Emery wonders whether Betty Jenkins' experience was the inspiration for a half century's worth of unverifiable tall tales about exploding bras on airplanes, or whether it was merely one of the incidents that inspired those stories ("It may be that some urban legends grow from the seeds of the truth," says the NPR producer), or whether -- gasp! -- it maybe didn't actually happen to Ms. Jenkins at all. After all, when I'm 94, I'll probably have utterly persuasive memories of personally rescuing Princess Leia from the Death Star.
Posted by Andy Duncan at 1:55 PM 1 comment: