"None of us is home until all of us are home."

-- Sister Mary Scullion of Project HOME in Philadelphia, quoted in Parade
Posted by Andy Duncan at 11:00 PM No comments:

Cumberland Times-News columnist Maude McDaniel recently passed along an anecdote that she acknowledges sounds a lot like an urban legend:

My all-time favorite flood story, which is said to have actually happened although it sounds too good to be true, is about the man who had an old piano he had been trying to get rid of for months. No one wanted it -- it was just a piece of junk -- and when the Flood came along, he saw it as a wonderful opportunity for free trash removal. So he hauled it out onto the front porch and congratulated himself on his cleverness. After the water went down, he went back home, and, lo and behold, there was the piano, still on the front porch. And out on the back porch -- was another piano!

Has anyone heard variations of this, or tracked down an actual documented account of such a thing?
Posted by Andy Duncan at 9:48 PM No comments:

When I was in college, my friends and I spent a lot of time at Cheat Lake, just a few miles outside of town. There was an old disused road there that ran to an old abandoned bridge to an island where a bunch of bikers used to party. One day, the school scuba team went diving in the area and found a dead body. I don't remember what the situation was, whether it was a suicide, an accident, or what, but while the police were investigating, they found a stolen car in the water near the bridge -- then another car. Then they found a bunch of illegal slot machines and other things.

Judging from the rest of the press release, Clites must have been a student in Morgantown, W.Va., circa 1978-82. Anyone else recall the WVU scuba team finding a body in Cheat Lake during that time? I'd be keen to know more about it, if so.
Posted by Andy Duncan at 4:23 PM 3 comments:

So that's what June was

Did you know that President Obama commemorated the 40th anniversary of the Stonewall riots by declaring June 2009 Lesbian, Gay, Bisexual, and Transgender Pride Month? That didn't make the news, here in GOP Maryland.

"To Lift a Nation" -- and the bottom line

"To Lift a Nation," the Sept. 11 monument at the National Fallen Firefighters Foundation in Emmittsburg, Md., was financed by an illegal Ponzi scheme, says the U.S. Securities and Exchange Commission. Now it's for sale. The asking price of $425,000 will go to creditors of the failed Coadum Advisors Inc., which allegedly commissioned the monument in hopes of a big tax writeoff, The Associated Press reports.

I wonder how many monuments and other landmarks that we take at face value today were commissioned for less than honorable reasons or beneath a cloud of financial wrongdoing. If you can think of examples, please let me know.

Sculptor Stanley J. Watts -- who himself had nothing to do with Coadum's finagling -- has an interesting page about "To Lift a Nation," with photos that show just how big it is.

The 40-foot bronze figures are based on George Johnson, Dan McWilliams and Billy Eisengrein, the three flag-raising firefighters in the famous photo by Thomas E. Franklin of The Record in Hackensack, N.J., snapped amid the ruins of the World Trade Center in the late afternoon of Sept. 11, 2001. (Since that day, incidentally, the famous flag has gone missing.) The photo has been reproduced ad infinitum, even on a U.S. postage stamp. Web pages devoted to the photo and its story include this one, at Victoria Mielke's interesting 9/11: Pop Culture & Remembrance site; the Wikipedia entry; and this one, where The Record will sell you a reproduction of the photo for $23.80, not to mention embroidered shirts, leather jackets, laser-engraved ceramic tiles, etc. (Proceeds go to charity.)

Ricky Flores of The Journal News in Westchester, N.Y., took his own photo of the flag-raising, from a different angle. Though equally excellent, Flores' photo is much less well known, partially because it emphasizes neither the men nor the flag but the surreal, spooky landscape of devastation all around.
Posted by Andy Duncan at 10:28 PM No comments:

My people, my people

Here are two June 24 news stories from our corner of Appalachia. In Westernport, several of the passengers in the pickup when its brakes failed "were seated in the bed of the truck in lawn chairs." Meanwhile, the assault weapon in Frostburg, police say, was "a sock that contained rocks."
Posted by Andy Duncan at 10:15 PM No comments:

This past week I had the honor of working with young fiction writers at the Savage Mountain Creative Writing Workshop, held each summer at Frostburg State University under the direction of my colleague Gerry LaFemina. The week culminated in a group reading this morning at Main Street Books downtown, where I made all the students hold still long enough for this photo. 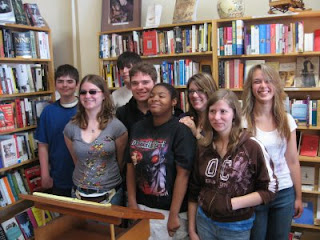